Guterres Warns of Violence in Nigeria, But Says Nigeria Able to Defeat This Threat 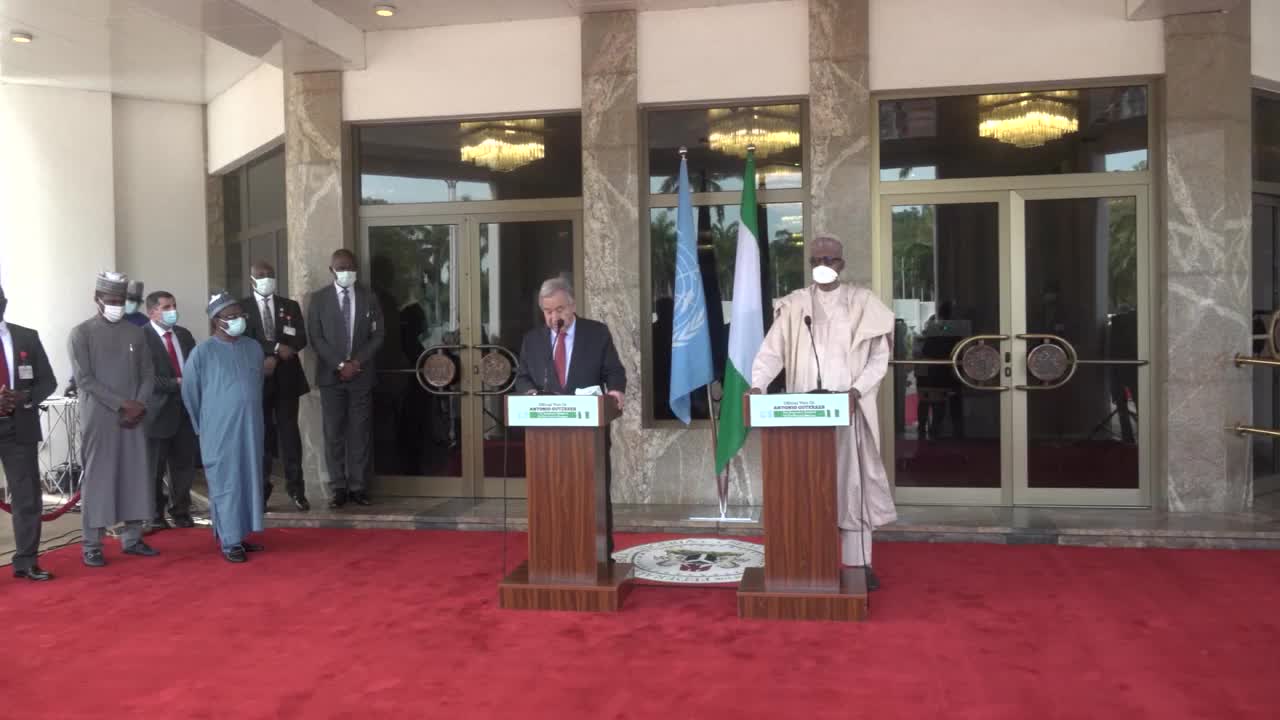 United Nations Secretary-General António Guterres warned of violence in Nigeria noting that he came out of Borno with the sense that Nigeria is able to defeat this threat.

A day after visiting Maiduguri, in embattled Borno State, and meeting with Nigerian President Muhammadu Buhari in Abuja Guterres said on Wednesday “violence continues to cast the shadow of death over so many Nigerians”.

Hundreds of thousands of people have been displaced in north-east Nigeria.

Asked about the crisis in Ukraine diverting much needed funds from humanitarian aid in Africa, Guterres said, “We have increased our action in Ukraine, but we have not decreased our action in all other parts of the world. And my appeal is for those that support financially the United Nations, not to divert funds from other humanitarian and development forms of cooperation to the Ukraine crisis, but to put additional contributions for that crisis, not undermining the efforts in humanitarian and development cooperation that are taking place all around the world.”

Guterres travelled to Borno on Tuesday after previously visiting two other Sahel nations, Niger and Senegal.

Borno has been one of the epicenters of violent extremism and terrorist activity in Nigeria and across the wider Sahel region.

Insecurity over the past 12 years linked to armed groups, including the terrorist group Boko Haram, has disrupted livelihoods and led to the displacement of some 2.2 million people, according to UN figures.

The UN chief visited the Bulumkutu Interim Care Centre, which opened in June 2016. The transit center has provided shelter, protection and other lifesaving services to 7,036 people, including 4,018 children (2,756 boys and 1,262 girls) in preparation for reintegration back to their communities.

Many of these children were forced – or chose, through a lack of other opportunities – to join terrorist groups and take up arms as combatants. Some were taken into detention and then released after being suspected of involvement in violent acts.

At Bulumkutu, they are being given a fresh opportunity to start a new life, under the tutelage of local religious leader Imam Mallam Abba Bilal Goni.

After meeting Internally Displaced Persons and victims of violence in Maiduguri, Guterres, together with the Governor of Borno State, Babagana Umara Zulum, spoke to journalist and said, “the way to address terrorism effectively is to provide, not only hope but a future of reality”.

The Secretary-General, said, “the best thing we can do for peace is to reintegrate those that in a moment of despair became terrorists but want to become now citizens and to contribute to the well-being of their brothers and sisters.”

To conclude, he said, “when I went around with the thousands and thousands of people that were there, I saw smiles, I saw enthusiasm, I saw hope, and this is where we must invest”.

Changing climatic conditions, including lower rainfall, have led to competition and sometimes conflict over limited resources; deforestation and overgrazing have further denuded the environment which the largely nomadic peoples of the Sahel rely on to survive and has led many of them to migrate to different areas, putting pressure on already stretched basic services, such as health and education. Thousands of schools have been forced to close, mainly due to insecurity.

The humanitarian response plan for Nigeria calls for US$1.1 billion to assist those people in need in the north-east of the country and is currently only 8.7 per cent funded.

The cost of humanitarian operations has recently risen, partly as an effect of the war in Ukraine, with the price of diesel increasing by 52 percent from the period prior to the crisis, while fertilizer prices have increased by nearly 49 percent.