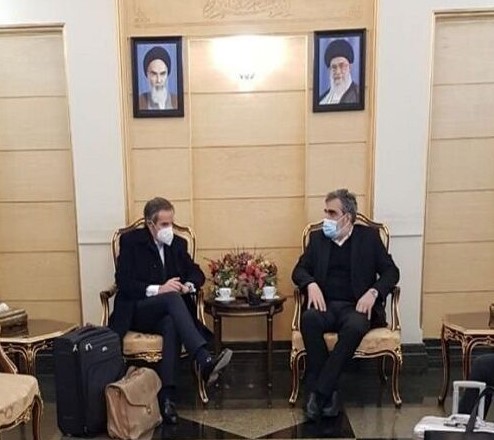 Director-General of the International Atomic Energy Agency Rafel Gros arrived in Tehran late on Friday to discuss with the Iranian officials the continuation of technical cooperation between Iran and the Agency.

Heading a delegation and in accordance with the agreement reached to discuss the continuation of technical cooperation with the Islamic Republic, Grossi arrived in Tehran late on Friday and was welcomed by Spokesman for the Atomic Energy Organization of Iran (AEOI) Behrouz Kamalvandi.

He is scheduled to meet with the Head of the Atomic Energy Organization of Iran Mohammad Eslami and Iranian Foreign Minister Hossein Amir Abdollahian on Saturday.

“I’m traveling to #Tehran today for meetings with Iranian officials tomorrow to address outstanding questions in #Iran. This is a critical time but a positive outcome for everyone is possible,” he wrote in a tweet on Friday before his departure for Tehran.

The visit comes as the eighth round of talks in Vienna between Iran and the P5+1 is underway.