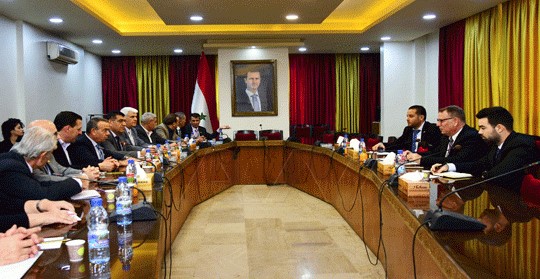 Members of the Syrian-Cuban Friendship committee at the people’s Assembly and the Ambassador of Republic of Cuba in Damascus, Miguel Porto Barga, discussed means of enhancing and developing parliamentary relations between Syria and Cuba.

Chairman and members of the Committee described Syrian-Cuban relations as deep and strong, affirming that both countries are partnerships in the struggle against forces of imperialism, hegemony, and aggression which aim to impose their agenda and confiscate the independent decision of the two countries.

The Ambassador, for his part, stressed his country’s continuous support to Syria in the face of western measures.

He called for more development on the level of bilateral relations and for more coordination at international forums to defend issues of the two countries.