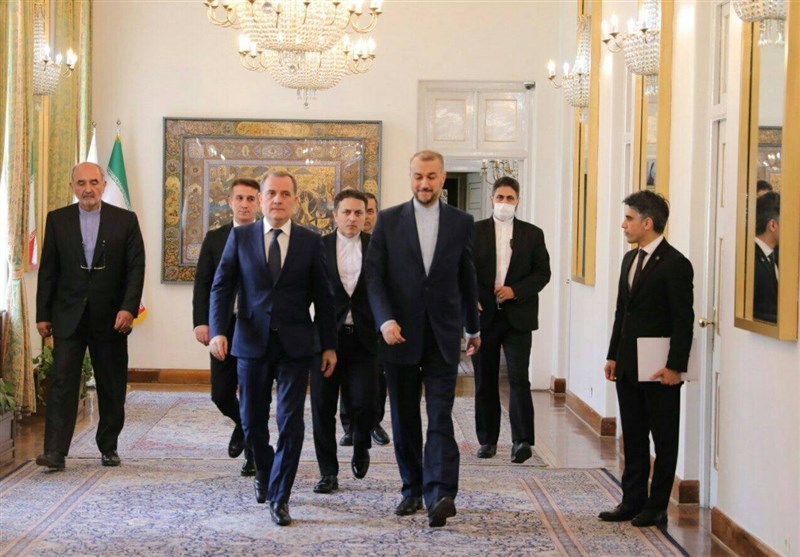 Iranian Foreign Minister Hossein Amirabdollahian said Iran and the Republic of Azerbaijan have overcome misunderstandings and are advancing negotiations to fulfill the interests of their nations.

Speaking on Monday in a joint press conference with his visiting Azeri counterpart Jeyhun Bayramov in Tehran, Amirabdollahian said Iran and the Republic of Azerbaijan have gone through the stage of misunderstandings over the past ten months and are advancing their negotiations in line with the interests of the two nations.

Expressing Iran’s support for the settlement of the Karabakh conflict on the basis of international principles, Amirabdollahian said Tehran is ready to help resolve the outstanding issues regarding the Karabakh row in accordance with the territorial integrity of countries.

Pointing to his last week’s trip to Ankara, the Iranian foreign minister unveiled plans for a trilateral meeting with his Azeri and Turkish counterparts in Tehran in the near future.

He also noted that Tehran will later host an expert meeting of the 3+3 South Caucasus Platform, followed by a ministerial meeting among Iran, Azerbaijan, Armenia, Turkey, Russia, and Georgia.

Highlighting the efforts to avert pollution in the Aras border river, Amirabdollahian said negotiations have been held to increase the trade exchanges between the two Muslim neighbors.

Iran and Azerbaijan have stepped up diplomatic contacts in recent months to broaden relations in the political and economic arenas.