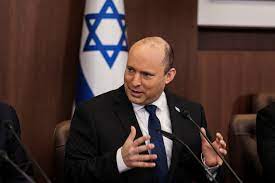 Israeli Prime Minister Naftali Bennett said Sunday that Israel’s goal is to break the “wave of terrorism” adding “We are in a period of alert routine in which we want the citizens of Israel to return to their routine and security forces to be at high alert”.

“It will not take one action but many hundreds of actions taking place all the time,” Bennett said during a tour of the security barrier.

“Together, we will make the effort to break this wave.”

It is worth noting that a Palestinian youth, Diyaa Hamarsheh, carried out on Tuesday a shooting attack in Bani Brak area, Tel Avivi, killing five Zionist settlers and seriously injuring two others.

On March 22, 2022, the Palestinian ex-prisoner Mohammad Ghaleb Abu Qiaan carried out a dual car ram and stab attack on a number of Zionist setters in Beersheba, southern occupied Al-Quds, killing four of them.

Moreover, two Israelis were killed in an attack in the city of al-Khedira on March 27 in the northern part of the occupied Palestinian territories.