Iraq’s President at COP26: Iraq one of the most vulnerable countries to climate changes 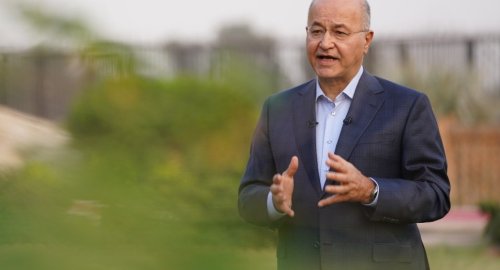 Iraq’s President Barham Salih said the difficult conditions that have affected Iraq during the past 40 years have made the country one of the most vulnerable to climate changes.

“Desertification affects 39% of the country’s area, and 54% of the fertile land is at risk of losing it agriculturally due to salinity resulting from the decline in the levels of the Tigris and Euphrates, as seven million people have been affected from drought, climate change and forced displacement,” Salih said on Wednesday in a message addressing the United Nations Climate Summit.

He added, “The government has adopted the Mesopotamian recovery project as a framework for developing the environmental strategy. It is a project for Iraq and the region, and it relies on strategic programs that include modernizing the management of the Tigris and Euphrates waters, generating clean energy and encouraging investment through green climate funds.”

The president went on to say “Iraq’s geographical location in the heart of the region, and its ecological diversity of palms, plains, marshes and mountains, can be a starting point for gathering the countries of the Middle East environmentally.”