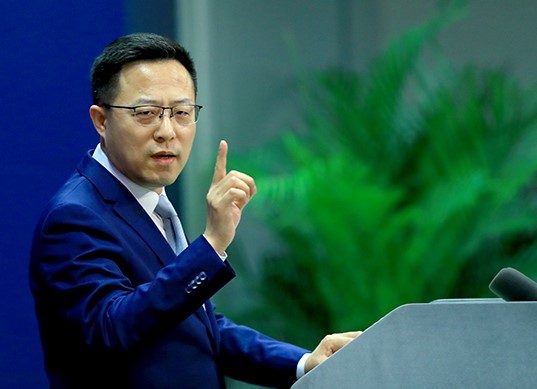 The US must stop all forms of official interaction with Taiwan and stop sending signals to separatists, backing independence for the island, a Chinese Foreign Ministry spokesman said on Thursday.

Beijing “has always been strongly opposed to all forms of official contacts between Taiwan and countries that maintain diplomatic relations with China,” Zhao Lijian told a news briefing, commenting on reports about forthcoming economic consultations between the US and Taiwan.

US officials’ visits to Taiwan or a trade dialog with the island are “violations of the One China principle” and attempts to support and encourage separatists, and these actions undermine peace and stability in the Taiwan Strait, the diplomat said.

“The US must fully comply with the One China principle and three joint Chinese-American communiques, stop all official contacts with Taiwan, stop discussing or signing agreements of an official nature with Taiwan,” the diplomat said, also demanding that Washington stop sending signals to separatist forces, backing Taiwan’s independence. The US’ persistent attempts to play “the Taiwan card” are endangering its relations with China, he added.

The US and Taiwan plan a series of consultations, aiming to boost economic ties, develop trade and promote innovative projects, according to a statement by the office of US Trade Representative Catherine Tai. The first meeting of the series is expected to take place in Washington later this month.

Blinken: US looking to China not to escalate tensions in event of Pelosi visit to Taiwan