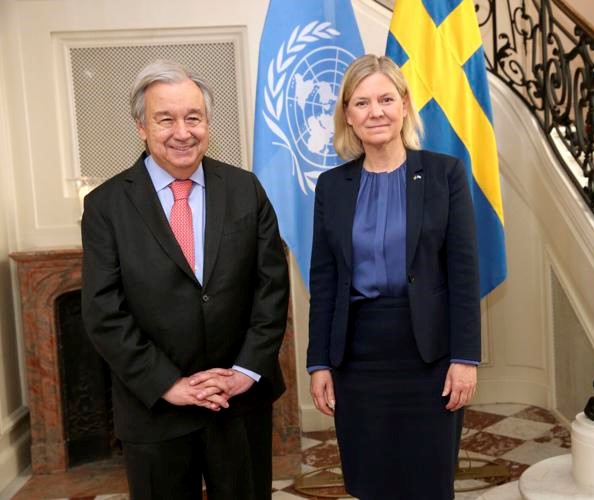 The Secretary-General met with Ukrainian Prime Minister Magdalena Andersson on Wednesday in Stockholm. He thanked Sweden for its steadfast support of the United Nations and multilateralism throughout the years.

In a joint encounter early this morning, the Secretary-General noted Sweden’s trailblazing role in gender equality and its championing of climate action and sustainable development, among other accomplishments.

The Secretary-General also noted that there are two UN teams, led by Martin Griffiths and Rebeca Grynspan, to help find a package deal involving the safe and secure export of Ukrainian-produced food through the Black Sea, along with unimpeded access of Russian food and fertilizers to global markets, especially in developing countries.

The Secretary-General urged countries who are planning to cut Official Development Assistance (ODA) to reconsider their stance, as these cuts will have dire consequences on the lives of the most vulnerable.

UN chief António Guterres said that the war in Ukraine ““inflames a three-dimensional global crisis – of food, energy and finance – that is pummeling the most vulnerable people, countries and economies”.

He also referred to the Stockholm+50 conference, which starts on Thursday, as a crucial opportunity to bolster our response to the triple planetary emergency of climate disruption, pollution and biodiversity loss.