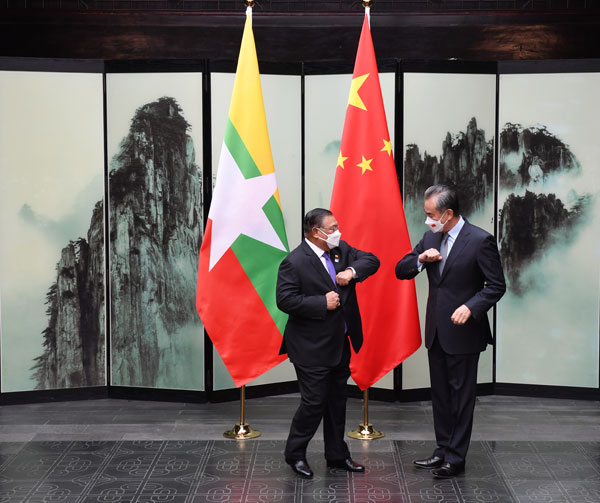 Hailing the traditional friendship between the two countries, Wang said China has always placed Myanmar in an important position in its neighborly diplomacy.

He said that no matter how the situation changes, China will support Myanmar in safeguarding its sovereignty, independence and territorial integrity, and in exploring a development path suited to its national conditions.

Wang said China is ready to work with Myanmar to deepen exchanges and cooperation in all areas to achieve the goal of building a China-Myanmar community with a shared future.

Wang called on the two sides to accelerate the construction of the China-Myanmar Economic Corridor (CMEC), better carry out major landmark projects, and deepen solidarity in the fight against the COVID-19 pandemic.

For his part, U Wunna Maung Lwin said that Myanmar fully supports China’s positions on issues concerning its core interests, and thanked China for its tremendous support of Myanmar’s development and fight against the pandemic.

Myanmar is willing to expand economic and trade cooperation with China, accelerate the construction of the CMEC, and push for more tangible outcomes under the framework of the Belt and Road Initiative, said U Wunna Maung Lwin.