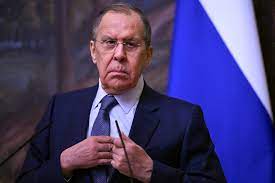 Despite the lack of governance expertise and political and diplomatic pressure from the United States and its allies, Afghanistan’s new government is managing to keep the state afloat, Russian Foreign Minister Sergey Lavrov said on Thursday.

“It can be stated that despite the lack of governance experience, financial and economic restrictions and political and diplomatic pressure from the United States and its allies, Afghanistan’s new administration is managing to keep the state afloat,” he said at the third ministerial conference of Afghanistan’s neighboring countries (Russia, China, Iran, Pakistan, Tajikistan, Turkmenistan, and Uzbekistan).

According to Lavrov, certain positive results are seen in the counter-terrorism track. “Efforts in the area of human rights are being taken,” he added.

After the Biden administration announced the end of its US military operation in Afghanistan and the launch of its troop pullout, the Taliban (outlawed in Russia) embarked on an offensive against Afghan government forces. On August 15, Taliban fighters swept into Kabul without encountering any resistance and gained full control over the Afghan capital within a few hours.

Afghanistan’s President Ashraf Ghani said he had stepped down to prevent any bloodshed and subsequently fled the country. On September 6, the Taliban said they had taken control of the entire country and the following day announced a new interim government. However, this government has not been officially recognized by any of the world’s nations.

Elsewhere in his remarks, Lavrov said Russia is seriously concerned over Islamic State’s (outlawed in Russia) plans of the destabilization of the situation in Central Asia and export instability to Russia.

“Of special concern are Islamic State’s and its allies’ plans of the destabilization of Central Asian countries and exporting this instability to Russia,” he said.

“I would like to note that the first Afghan diplomat, who arrived in Moscow last month, have been accredited by the Russian foreign ministry,” he added.

According to Lavrov, Kabul is taking efforts to expand economic and diplomatic ties. “Officials of the Taliban (outlawed in Russia) government regularly meet with foreign partners in bilateral and multilateral formats, as it was in Moscow, Tehran, Doha, Oslo, and Antalya. Today, this list has been supplemented by the city of Tunxi,” he said, adding that Moscow observed gradual improvement in Afghanistan’s economic cooperation with other countries of the region, which demonstrate interests to that country.